Well, it’s that time of year again. Summer is nearing its end, and since the last update was near the beginning of summer – exactly three months ago – it’s about time for another one. And there is thankfully a lot of progress to be reporting.

This is our first update since the Steam release of Detective Butler on Steam. It’s been amazing seeing so many people all around the world enjoy the game. Tens of thousands of people have played it and by the time this post goes up we’ll have 100 total reviews. It’s also unbelievably inspiring and motivating to read the positive reviews and see just how much you guys liked it – I’m reading every one of them! Even the negative reviews often have good points (I know too well that the game is not without its flaws) and we’ll be improving upon those for the sequel.

Now, speaking of Detective Butler 2… where does our progress stand?

Well, since we had to sink a lot of time earlier in the year into the Steam release of the first game, we’ve only been able to consistently work on Detective Butler 2 over the summer. In order to understand how much work has been put into the game over the summer, we first have to understand what kind of game we’re trying to make. The game’s design has slightly shifted since the previous blog posts were written, mostly in a way to make the development go faster. Let’s go through these changes one at a time. 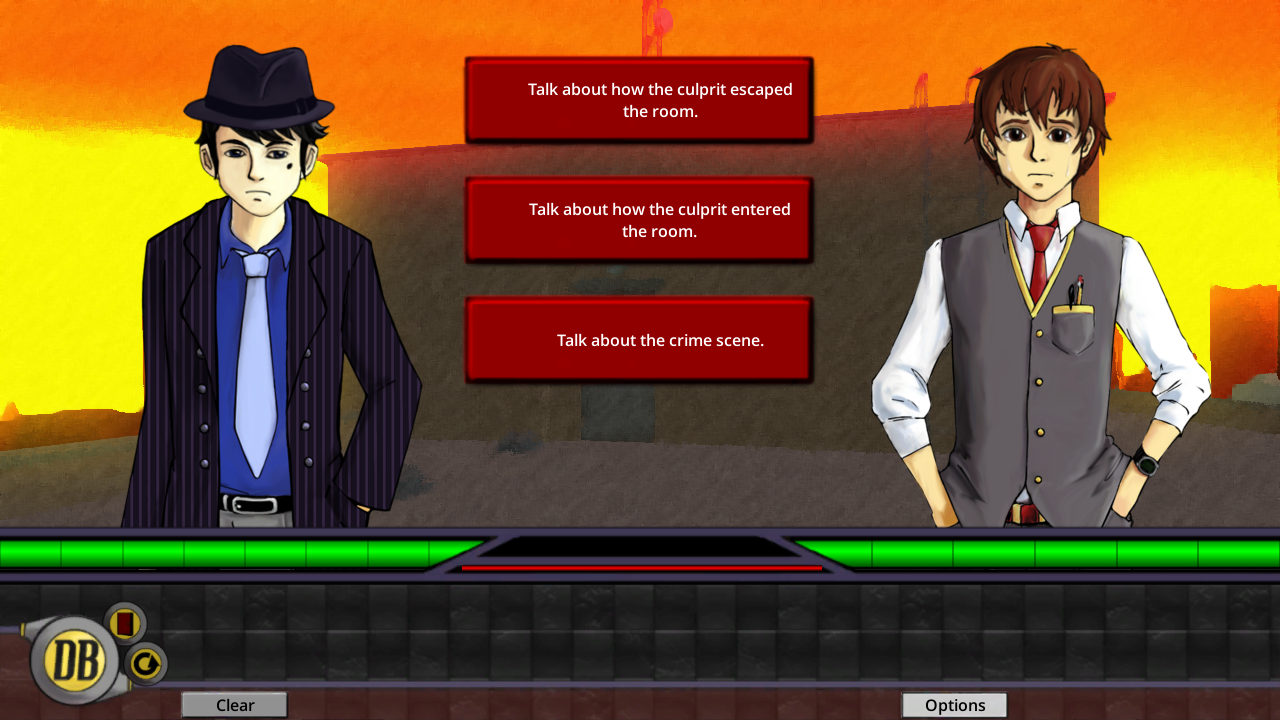 The first change is the format. Since we are now on Steam, there is no longer any reason to host the files on our own server – we can use Steam’s server instead. Then, as chapters come out, we’ll push updates to each player’s Steam client. Probably one chapter per week. Keep in mind that the chapters will contain their own mystery and story arc, so it should be pretty entertaining until the next chapter unlocks. But this change only affects the internal development of the game, and doesn’t really change the way the game itself is played. It’s simply very convenient that we can use Steam’s distribution methods for deploying new chapters instead of having to create our own.

Secondly, the writing has gone through some major changes, mostly in style. The premise of the story has always remained the same, but the details are becoming clearer every writing session. I also realized that writing in third person was not the best idea, and that by following my convention from the first game by writing in first person, I could have characters express their feelings about the world through inner narration. That’s a lot more interesting to read (and to interpret) than omnisciently stating what happened, especially because of the subjective nature of murder mysteries. A lot of information is going to be interpreted by you second-hand, so hopefully you’ll figure out who can be trusted.

The next change is regarding the general presentation. You may have seen in some earlier screenshots that we made use of a lot of different camera angles to show sprites in a 3D world. Although I think that technique is still useful, I knew something important was missing: the three-sprite structure. Now, just like in the first game, you should be seeing screenshots of characters standing in the left, center, and right positions. Maybe every once in a while you’ll still see characters blending into the background, but the foreground sprite structure allows for more versatility in the writing. For example, I can simply describe a character moving around than actually showing the character move in 3D space, which is obviously a lot more complicated. Also, the font has been changed to the same font used in the first game, for nostalgic reasons. 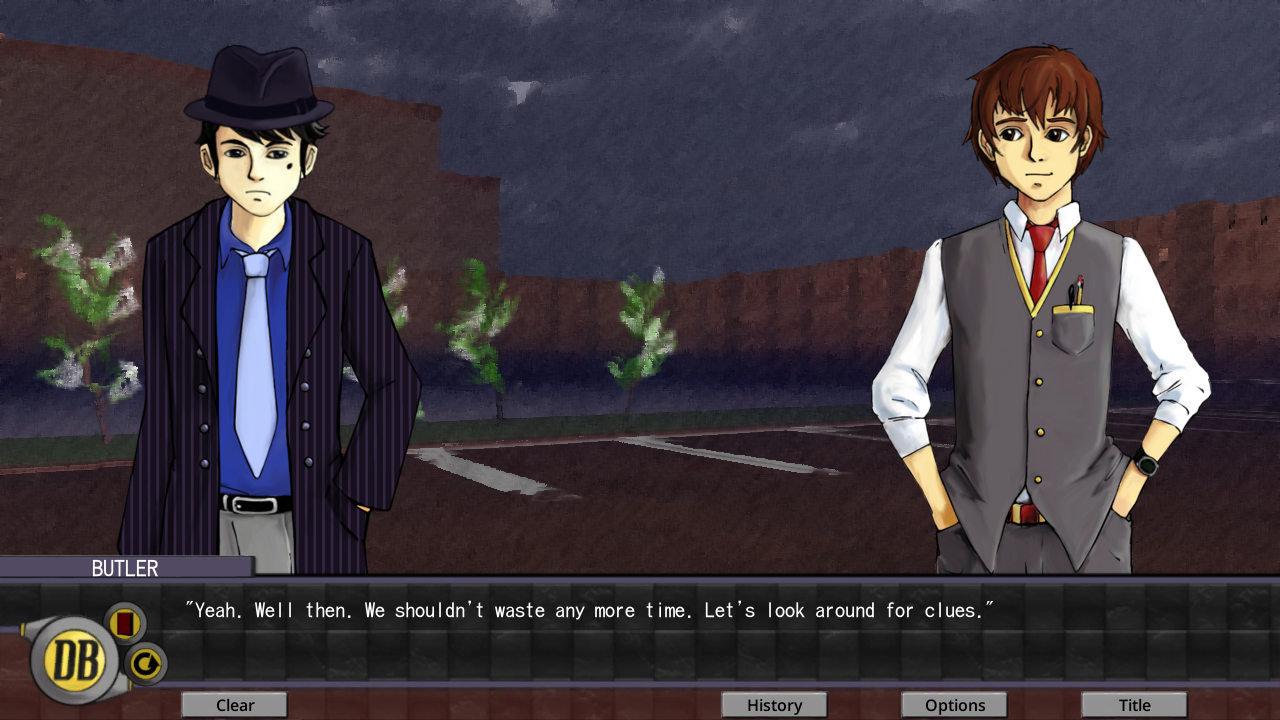 By that same token, we have decided to change the way the investigation sections will work as well. No longer will you use direct keyboard arrow keys to move throughout a 3D space – again, that became too complicated and even unintuitive. Instead, you’ll look around the crime scene by switching between camera angles with the mouse button. So the investigations will be a bit similar to point and click games, except the backgrounds aren’t being drawn in 2D but are projected in 3D. Being able to view the crime scene from multiple perspectives will allow you to see certain clues you couldn’t see otherwise. Knowing where to look, and how to look, will reveal the clues necessary to advance the story.

The last big change is regarding the battle system. To be fair, we never properly explained how it worked in the first place, so it might not even sound like anything has been changed. But we noticed that the system became increasingly complex and hard to play, even for someone who knew what was going on. So we simplified the controls, and reduced the battles to its most interesting element. You will need to use the clues that you found during the investigation sections to prove your points during the battle with the culprit. The answer to the mystery will slowly be revealed throughout the battle, in a non-linear fashion depending on the choices you make. Additionally, it is entirely possible to lose to the culprit. The culprit will get away with the murder, and the game will move on to the next mystery. You’ll be given a rank depending on how well you did, and if you did exceptionally well, you might just unlock something cool! 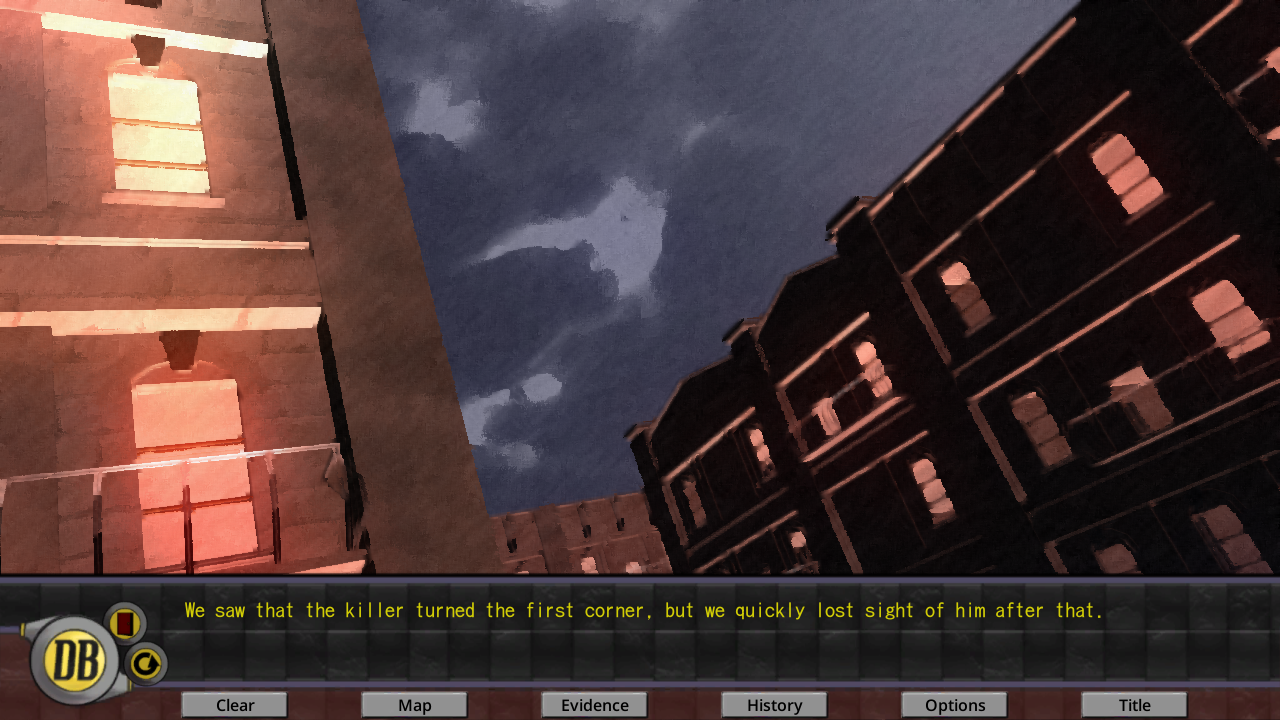 So now that we have a clear idea of what the game is going to be like, what exactly is the current state of the game? Simply put: we are in the process of coding and testing the first third of the game, revising the second third, and writing the final third. I have almost no doubt in my mind that the word count will exceed 100,000 words, which based on the first game’s reading time, should amount to roughly 12 hours of reading alone. Factor in the gameplay (multiple investigations and one battle per chapter) plus the replayability, and you can imagine how long this game might take to complete. That said, word count and length aren’t especially important, as long as the game itself is entertaining, so even if we come up short on length, I’d rather do that than make a long and boring game.

Also, I wish I could say more about the story, but that will have to wait for at least another month or two. I really want the game to be full of surprises, so explaining the story in the development blog would defeat the purpose of a story-based game. It also addresses some really delicate topics and I have to be very careful about choosing the right words. The motives for each of the culprits have to be meaningful, and the way they commit their crimes has to make sense. Like I’ve said before, the characters can make or break a story. A murder mystery is like a puzzle game, where each suspect is a game mechanic, and so to understand the mystery you have to understand not only how each character works but also how they work in relation to each other. So even mentioning some minor details about the characters too early could ruin some puzzle-solving experiences in the finished game.

Lastly, we’re still considering a demo, but only once the game is very close to completion. That way we’ll have a better idea of what should be in it (and what shouldn’t be). I’ll be posting more frequently from now on, so look forward to more regular updates! Let’s aim for one blog post a month, just like old times! Maybe two or three if we have something fun to share. But either way, whether you are someone who has been checking this website for years or just finding us through Steam, thank you so much for playing our games! We hope you will stay for more!